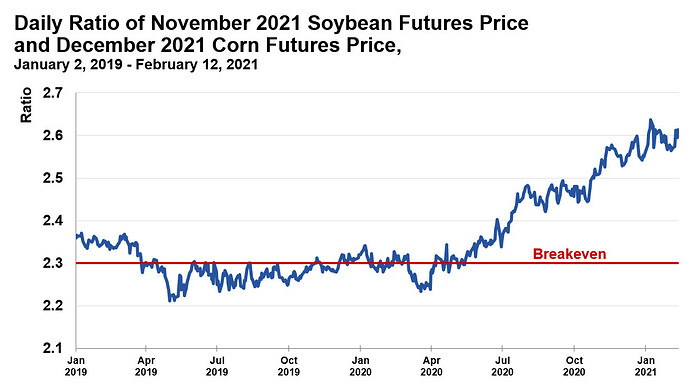 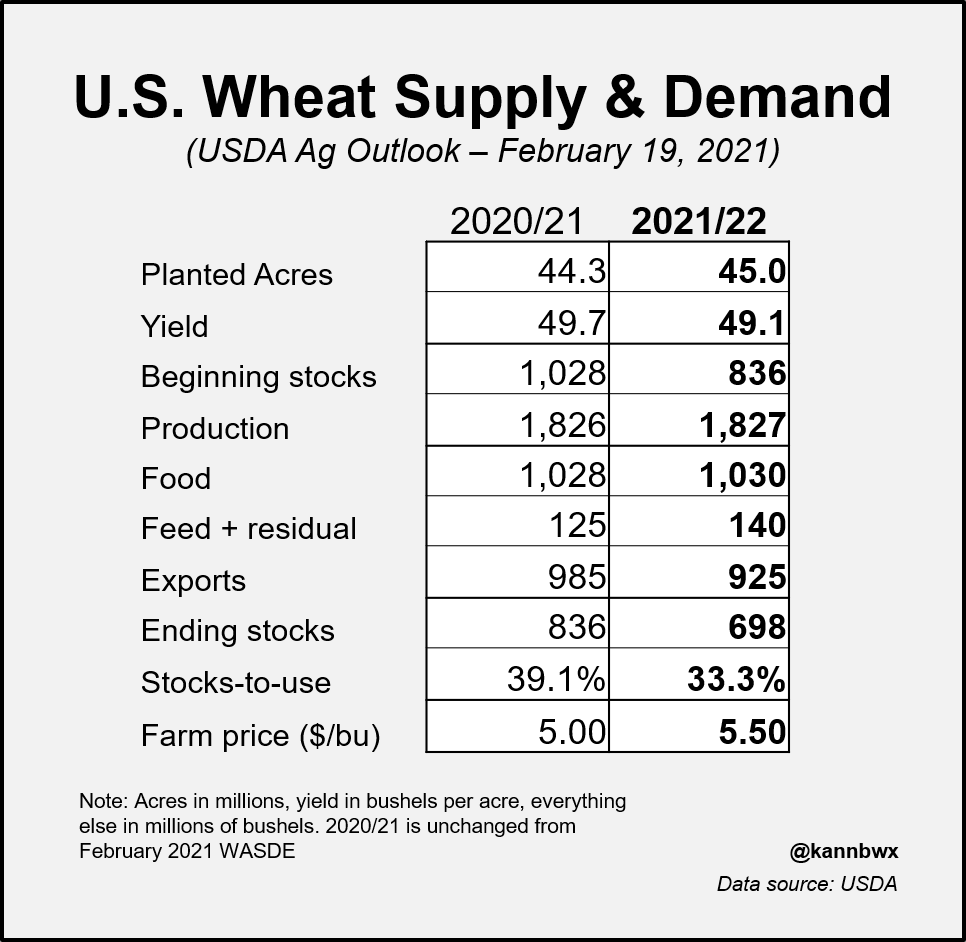 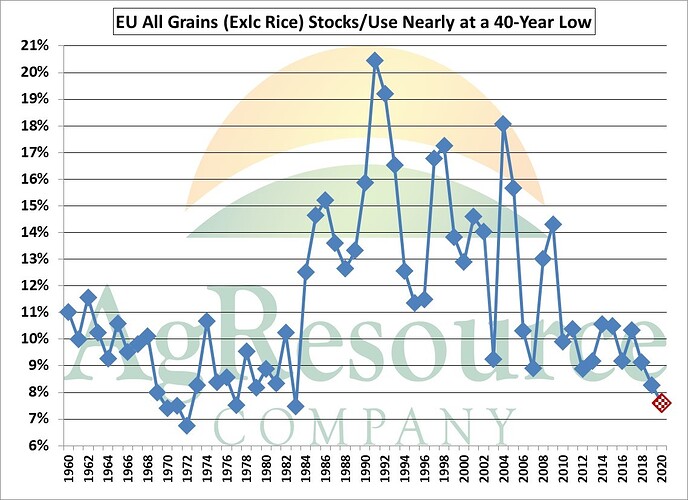 Since at least 2010, USDA has not reported US soybeans carryout this tight in the early annual Ag Outlook Forum (despite record output anticipated & second-highest yield)! corn carryout is the tightest projected since the 2011 (LaNina) 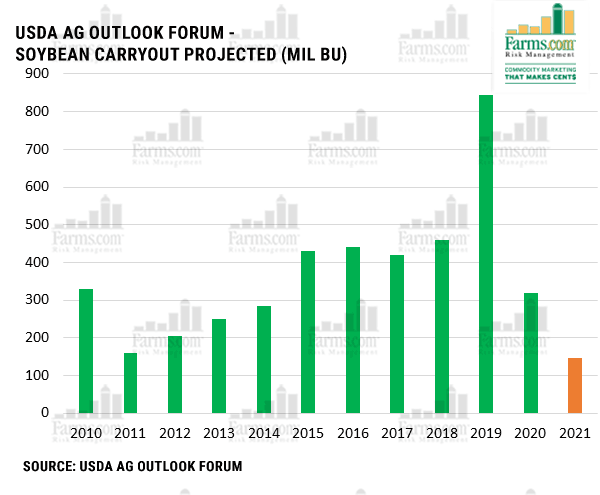 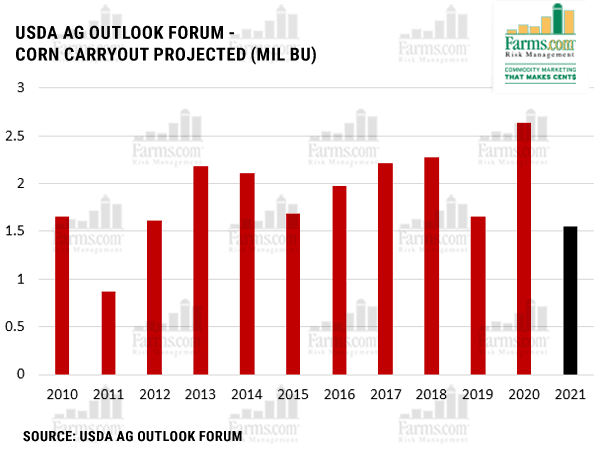 Historically low temperatures in Kansas, Nebraska and Colorado combined with severe dryness in those states is threatening yield potential, according to U.S. Wheat Associates.

A prolonged cold snap in the Great Plains region of the United States may have caused serious damage to the winter wheat crop.

Historically low temperatures in Kansas, Nebraska and Colorado combined with severe dryness in those states is threatening yield potential, according to U.S. Wheat Associates.

“Producers in the Great Plains have seen sustained temperatures below (-12 C), low enough to cause serious concern about the crop’s ability to survive dormancy,” USW market analyst Claire Hutchins wrote in a recent Wheat Letter blog.

Snow cover would typically help insulate the crop against freeze damage but western Kansas, western Nebraska and eastern Colorado have been exceptionally dry.

Topsoil moisture in Kansas was rated 21 percent very short and 34 percent short as of January. That is 15 percentage points worse than a year ago for those two categories combined.

Nebraska is concerned about poor emergence and weak stands. According to the U.S. Department of Agriculture, 30 percent of the state’s crop is rated good to excellent, compared to 70 percent a year ago.

Some analysts are shrugging off the cold snap, noting that the U.S. winter wheat crop has recovered from similar events in the past.

But USW appears to be concerned.

“Unlike lighter freeze damage, from which the wheat can bounce back under the right conditions, this year’s freeze event has the potential for winterkill in some regions and ultimately challenge the final production volume,” said Hutchins.

Arlan Suderman, chief commodities economist with StoneX, shares her concern. He noted that the thermometer dropped to -29 to -34 C in portions of the central Plains on Valentine’s Day.

He said in a recent tweet that Commodity Weather Group estimates 30 percent of the hard red winter wheat crop was susceptible to significant damage and another 15 percent to spotty damage due to lack of snow cover.

“Wheat is a funny plant that does the unexpected but as a former agronomist, this was about as extreme as I’ve seen it in Kansas over the past 40 years,” Suderman tweeted.

“I know that wheat will make a liar out of anyone, doing what it’s not supposed to do. But conditions were harsh enough to do considerable damage this weekend.”

Wheat growers in Nebraska and Colorado told USW that early spring rain will be the key to determining this year’s production potential.

“If we go too long into the growing season without moisture we will start losing potential,” said Brad Erker, executive director of the Colorado Association of Wheat Growers.

“We are in worse shape now than this time last year and 2020 ended up being a very small crop for us. We can’t wait until the end of April for moisture or we will lose a lot of acres.”

The U.S. National Oceanic and Atmospheric Administration is forecasting either persisting or developing drought for Texas, Oklahoma, Kansas and Nebraska this spring through the end of May.

Meanwhile, SovEcon is reporting that Russia’s wheat crop entered winter in the worst condition in a decade and poor snow cover has left some areas vulnerable to winterkill.

The consultancy recently scaled back its 2021-22 Russia wheat production forecast to 76.2 million tonnes, down from its prior estimate of 77.7 million tonnes. 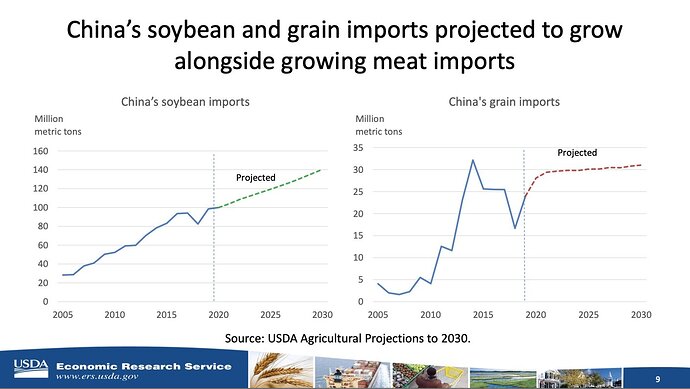 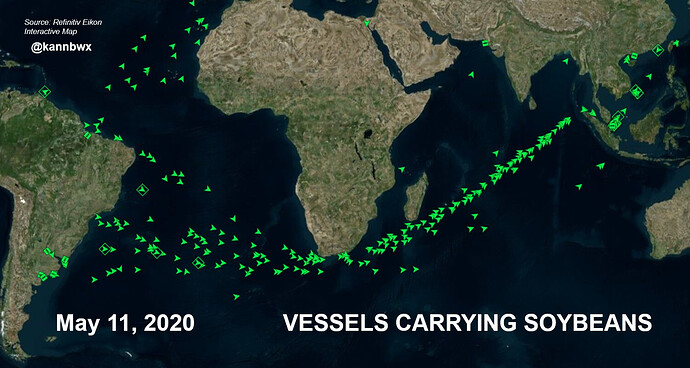